The Aposimz is a structure floating through space, 200,000km long. Most of the ship is composed of its core, a vast central system full of ultra-advanced technology. The core systems are protected by a near-impenetrable shell. Outside the shell, a war thousands of years old is being fought over who qualifies as a legitimate citizen aboard the Aposimz. Life for the lowly denizens of the ruins level is tenuous at best. Food is scarce, the lethal opposition soldiers are always on the prowl, and the apocalyptic frame disease threatens those infected with a creeping spiral into a drone-like existence. The on the Aposimz are frozen- stuck in perpetual winter, silent except for the sporadic conflicts as extermination teams survey for their defenseless enemies.

The ruins level is sprawling, like an immense derelict factory. Everything is tubes, hoses, gauges, ancient machines that no longer serve a purpose. All of it is covered in snow and ice.

Nihei excels at taking big ideas of where humanity can take itself- not just into space, but the grand things it can build, its ability to persevere against the worst possible odds, and the ways in which people define and accept their physical forms. Nihei’s human and computer characters often move back and forth between physical states.

Nihei often makes references to past works, creating a soft vocabulary of terms that he weaves and tweaks from series to series. The gauna, Nihei’s central adversary from Knights of Sidonia, first appeared in his previous manga, Abara. While Aposimz hasn’t yet mentioned the leviathan creatures, certain aspects of their nature seep into the weapons in this new title.

The Aposimz seems to be the ship mentioned early in Knights of Sidonia, where it was a seed ship for humanity, desperate to escape the unhinged onslaught of the all-consuming gauna. The often big-but-vague ideas Nihei presents throughout his narratives serve his manga well. He never gets too caught up in the details- always in a hurry to get to the action. Nihei makes quick work of introducing characters only to kill them off within a few pages, another trademark of his narratives. With so much going on at such blinding speeds, it’s easy to lose track of who’s doing what in Nihei’s work. Aposimz is no different, leaving the responsibility on the reader to figure out the nuances and jargon of his world.

In typical Nihei fashion, he also peppers his Aposimz with bizarre contradictions. The heavies fighting for the ruling class are called “regular frames” even though they are humanoid super-weapons capable of immense carnage. Nihei loves to give his terrors mundane designations, as in Biomega’s “Data Recovery Foundation”, which was hellbent on destroying humanity.

So far, Aposimz has proved a welcome addition to Knights of Sidonia. However, it felt clear toward the end of the series that Nihei was in a hurry to reach its conclusion as chapters became much shorter and the climax felt stunted and rushed. Through the first two issues, Aposimz is more focused and has even forgone some action in favor of stronger characterization.

For readers who ignore manga because the most popular releases are geared toward a younger audience, Aposimz proves a fine seinen alternative. Aposimz hints at big ideas and has brilliant art throughout.

Etherow, in a regenerative state. 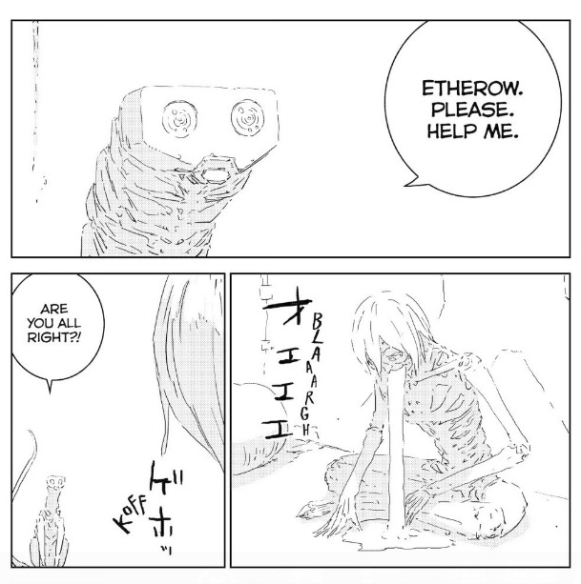 Foraging on the frozen ruins level. 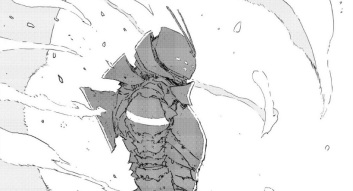 A regular frame is more dangerous than its name implies.

Transmuting takes its toll on the body.

View all posts by spaceraptorsfromspace